Just wanted to take a minute to let you all know that we’re back in NYC to see Zane Carney live @ the Rockwood Musichall for the release of his debut solo album, Confluence. I’ve raved about him from the beginning. Check out some of my older posts with links to his YouTube videos! He really is fantastic & pulled some strings for my Morgan to get in even though its 21 & older! Will keep you all posted, but I’m sure he will not disappoint!

The first photo is of my daughter, Morgan & Zane Carney! He was so cool & totally made the trip worth it! I don’t know if I posted it or not, but I don’t think I did. If so, here it is again! LoL 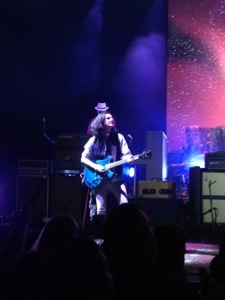 Here’s the set list for the Jones Beach Theater. Steve Jordan, who is the drummer for the John Mayer Trio made a special appearance & played with John & the band. Unfortunately, we tried to get there, but the powers that be wouldn’t have it.

Sadly, due to schedule issues we couldn’t make this show even though it was closer than some of the others we were at.

FIRST NIAGARA PAVILION 08-25-13
Apparently there was an engagement in the front row. John noticed it midway through “Slow Dancing in a Burning Room” and even paused for a second to solo Wagner’s bridal chorus on the electric guitar. Very cool.

These are pre sale dates for Citibank customers. I do not know much about it, although I am a Citibank cardholder. You are responsible for reading any fine print via the link below. I am passing it along as a courtesy.

Here’s a full breakdown of the Citi Private Pass pre-sale times for the Fall Tour:

Here are the newly added dates for john Mayer’s Born & Raised Tour! There are “Citibank pre sale tickets” available. I’m going to try &get them to you, but I’m blogging on my phone b/c my laptop crashed which makes my life much more difficult. But, I’m hoping to get to see John Mayer @ least once more with these new dates. Most aren’t anywhere near me, sadly!

So my spontaneous side got the better of me again! I decided last minute we needed to see John Mayer one last time since we missed out on the Jones Beach show & the whole trip turned into such a disaster.

So off to the Borgata we went this afternoon with tickets already purchased this time (for standing room only!). Ugh, what was I thinking ? Well we had to wait all squished in like sardines for an hour before the show started. And if you haven’t noticed, ima big girl & I don’t handle heat too well big or not. So I lasted only about half the show standing on the floor. But really, what did I miss? Same songs & not much interaction. The Borgata is a nice, smaller, more intimate venue. We had hoped JM would be more chatty, but sadly not. He sounded excellent as always, but a lot of people have walked by me here as I’ve been relaxing in a nice comfy chair complaining about how “he sucks, he doesn’t talk to anyone, he’s so detached.” I also heard him compared to a lot of other performers who people are saying seen so much friendlier. (I’m going to refrain from names here). As far as that goes I think I have to agree. He just doesn’t seem friendly anymore. That last time we saw him in Allentown he was, but really that’s all I’ve seen from him. And truth be told I am a bit disappointed. Musically though he NEVER disappoints! Do that has to account for something!

The best part of the entire night is we met Zane Carney, John Mayer’s guitarist whom I have discussed before! Not only is he an awesome musician, but he’s a really cool guy! He actually came up to us!!!! And said, “I saw you guys first!” How freaking awesome is that! So we’ve been on Zane’s Instagram, he answered Morgan on tumblr, retweeted me, recognized us, posed for a pic, welcomed Morgan with a hug, & gave us an autograph!!! I just absolutely love him! Can’t wait to see him solo sometime soon!

Sadly our John Mayer chase has officially come to a close at least as far as the Born & Raised tour is concerned. I am sure though that there will be more to let you know sometime in the near future! For now, ciao!