These are the photos Morgan & I submitted of “who or what we love.”
We thought they were pretty damn good, but we lost to a family pic! Yes, I am slightly bitter! LoL 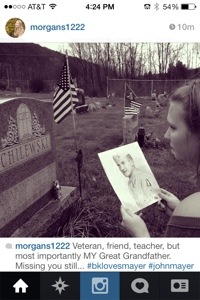 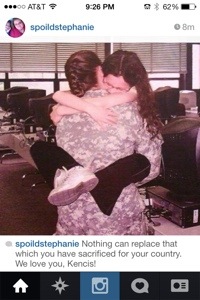 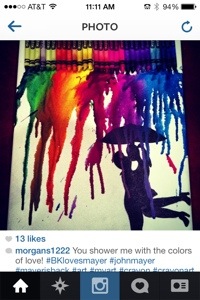 John Mayer met up with Ari Shapiro from NPR on Thanksgiving day for a live interview. The link is below for those of you who were too busy with family or unable to tune in to NPR. It’s a nice little 22 minute interview with some live songs from Paradise Valley & one flashback! We learn that John Mayer & I have the same favorite food at Thanksgiving dinner & the one word you never want John Mayer to say to you if you ever meet him! LOL Enjoy & I hope you all had a nice holiday!  I hope this link works!

ok this is totally non John Mayer related, but I have a favor of all my loyal fans! a radio station in new jersey is running a contest for veteran’s day. the 10 finalists are on the page with their stories. Hey John Mayer is very involved with charities for veterans so maybe it’s not so unrelated after all!!!!!

anyway, there are less than 2 hours left for voting! It ends at midnight EST! please, please, please use the link below & vote for “Bob from Toms River!” Kencis is a friend of mine & she deserves this $10,000 home makeover!!!!

I’m begging you! remember it ends in 2 hours & you can vote repeatedly! Why not do a little something to help a veteran & mother out while adding a few coins to your karma bank!

Below is the link to Morgan’s entry into the “Who You Love” contest. Go to Instagram & like it. And then you can go to the billboard link under that & make an image in the gallery with her photo!
We really appreciate it! I hope the links work. LoL

I can’t sleep & I’m in a strange kind of mood tonight. So I thought I’d do a bit of personal stuff & give you the top 50 reasons why I love John Mayer…

1. How serious & into his music he gets when performing.
2. He plays multiple instruments including piano which happens to be my favorite next to the cello!
3. Yes, he is incredibly sexy & doesn’t even have to put effort into it.
4. His tattoos are pretty bad ass.
5. He lives in NYC, one of my favorite places on earth.
6. A great sense of humor.
7. His douchebaggery which is just part of that aforementioned sense of humor.
8. He dated Jennifer Aniston (how can you not love her?)
9. Comfortable & the rest of the Inside Wants Out EP
10. His previously unrefined voice that just oozed talent waiting to be unleashed.
11. The cultivated gift that eventually was unleashed in his vocal abilities.
12. He hasn’t married Katy Perry, yet. (but I’m guessing a proposal is on the way around the holidays even though if my momma taught me anything it was: once you make your mind to leave someone no matter how many times you go back you’re still going to split b/c there was a reason you wanted out in the first place! (for the majority anyway) & I don’t like her, but I guess I don’t have to like her.
13. He has actually said, “this is a song about girly parts” LOL
14. Who could forget those lips?!
15. He’s involved in charities like VHIP & GlocalCitizen.org
16. He brought his dad on stage in Denver.
17. Something’s Missing…
18. He changes his look almost as often as Madonna & he always looks great!
19. He spontaneously bought a girl a guitar in NYC.
20. Zane Carney!
21. He writes about realistic shit & apparently real people, but it’s cool to have your own song! I’ve got my own song from a friend & while I’m not quite the cat’s pajamas, I’m still pretty fucking cool! LOL I’ll post for you sometime!
22. John Mayer shares his birthday with the likes of: Noah Webster, Bert Kaemfart, Oscar Wilde, & Angela Lansbury (who doesn’t love the tea pot from Beauty & the Beast?)
23. Fruit Vultures!
24. All of his Rolling Stone covers!
25. The John Mayer Trio
26. All the funny faces
27. His shows start on time
28. He used to make time for his fans hopefully will again someday.
29. He does silly things like taking pics of fans taking pics of him
30. There is no John Mayer cologne or perfume
31. He recently leaked his latest CD, Paradise Valley, so we could enjoy before it was available!
32. Some of his songs are a bit cheesy & everyone needs a little cheese from time to time.
33. He’s a pretty good photographer.
34. Versatile! Dressed up or down he always looks like great!
35. He’s friends with Justin Timberlake. I don’t know how good, but I love JT too!
36. He is a connoisseur of time pieces! A good watch is the one accessory I cannot live without! Obviously I’m not up to “John Mayer good” standards, but I love them nonetheless even mine that are about 1/1000 of the cost of JM’s! lol
37. The following is an actual quote, “you know there’s an encore too. The encore is sort of like the condom in the pocket: everybody knows it’s there but nobody talks about it.” Love it!
38. Assassin (strikes me as such a different song from his other stuff)
39. He’s a pervert & never tried to hide it.
40. Dental hygiene is a priority
41. Of all his songs I can name only a few that I can say I don’t really like.
42. He is very grammar conscious.
43. The funny or die video about making a song.
44. That baby face!
45. The mankini!!! hahahaha
46. He does read the signs @ his shows
47. He used to use twitter & instagram quite often (that was fun. wish he’d start again)
48. Randall the camera fellow! nice guy!
49. The Christmas sweater he had on for Ellen
50. The diversity of his albums!

Feel free to leave me your reasons if I missed them in my own list!

John Mayer played the last of his shows in Europe for this leg of the tour on October 26, 2013 @ Wembley Arena in London (I sure hope he crossed Abbey Road while in London.  Crossing over should be done on every trip to London and if he had told us we could have watched it live on my “Abbey Road Cam App”.  That would have been nifty!) The show was sold out as just about every other show in Europe had been!  What a rush that must be!  I wonder if he wakes up and says to himself, “so what’s playing in front of 20,000 people, no big deal!) But seriously, does John Mayer or any other “big time” celebrity for that matter get stage fright? I practically pee my pants when singing in a bar in front of 30 people. I just cannot even imagine…Sorry to go off in a different direction on you.  Back to the here and now,  I’m guessing he’s back in NYC or maybe he took an extended holiday abroad, who knows. Whatever his plans he has a bit of time off from touring until 11/19 when he’ll resume the Born and Raised Tour in Moline, IL. He has been pushing so hard for so long he definitely deserves a bit of a break! He’s certainly put his all into his performances. Now lets hope he takes some time to let his voice and body rest. Without a doubt he’s earned it!

Now I’m going to let you in on a thought I had about this European tour.  You can feel free to leave me a comment; let me know if you agree or maybe you think I’m off my bloody rocker.  Did anyone else notice that our precious and adored John Mayer’s appearance seemed to change for Europe?  He seemed to have a nice little hair trim and lost his headband and brought back a lot of flannel!  OK, I do not have a problem or issue with any of these things, but just wondered if I was imagining things.  We saw that head band (or one very similar)  in every show in the US except the Hollywood Bowl just before he left.  And another thing which is heading off topic slightly, but not,  what happened to that little medicine pouch JM wore for the first month or so?  He wore it for every show including our first 2 or 3 and then :poof: never saw it again.  Back to where I was originally heading.   My thoughts was, “Did Mr. Mayer’s PR people encourage him to change his image back to his youthful days for the trip to Europe?”  He looks great either way, but was someone worried they weren’t ready for John’s newer more bohemian fashion sense in Europe?   Hell, they’re much more laid back than we are here in the US and I took notice several months ago that many of those shows were sold out completely very early.  I wouldn’t have thought appearance would be a concern.

I’m not going to list all the set lists from the shows in Europe since most shows continue to be the same songs. (good for the prevention of my hissy fits! lol) JM does continue to change up a few songs at each show the way he has all the way through the tour thus far. Even brought out a few we haven’t heard yet like Blues Run the Game by Jackson Frank, I’m on Fire by Bruce Springsteen & Buckets of Rain by Bob Dylan (VERY COOL). He also threw in a few of his own that we rarely get to hear: Daughters, No Such Thing, and Walt Grace(I’M SO DAMN JEALOUS, I LOVE WALT GRACE!!!!!) After perusing the social media sites for all hashtags pertinient to John Mayer I’d think it’s safe to say, “Europe loves John Mayer as much as we do here in the US! And why shouldn’t they? He’s John Fucking Mayer for Christ’s sake!!!!   Who wouldn’t love him?!?!